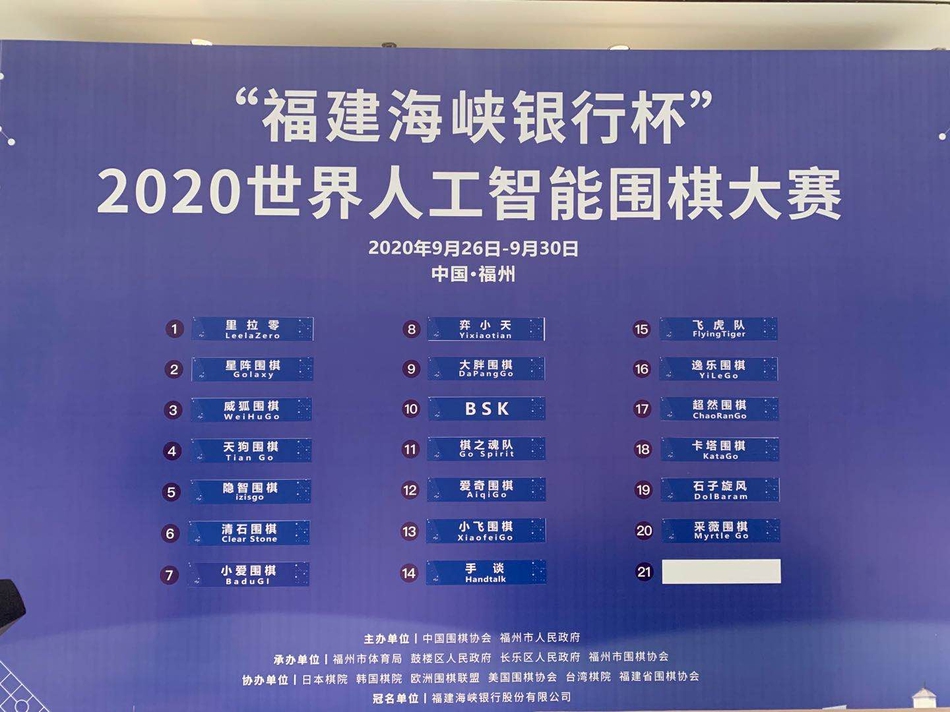 On the second day of the "Fujian Strait Bank Cup" 2020 World Artificial Intelligence Go Tournament, rounds 3-5 were held. From 9:30 to 23:00, it was the most difficult day. After yesterday’s test, most of the teams have gradually adapted to the time-consuming and posting rules, and understood that this is actually the 6.5 target version of the Chinese Digital Rules, which is equivalent to the Japanese and Korean rules most of the time. The competition is getting better and better. In the third round, the strengths and weaknesses were relatively clear, and the popular teams won one after another. The defending champion star array, who had the highest voice before the game, also easily defeated the undefeated Plucking.

entered the strong dialogue mode in the fourth round, which gave birth to many wonderful games. The last runner-up, Xiao Ai, played against the popular American open source program KataGo. Both teams were highly vocal before the game. Previously, they were 1 win and 2 losses. Losing this round is almost equal to being eliminated early. The two sides were full of gunpowder as soon as they came up. The 37th and 38th hand-to-hand conversions were eye-popping. Afterwards, the "impulse" of 38 may be the cause of the overall passiveness. When the game progresses to a hundred moves, the white dragon with 27 pieces must support a black chess KataGo, which is almost worry-free and is at stake. At this time, Bai resorted to all his strengths to discard the upper left corner for a thrilling breakthrough, and instead ate the black mid-belly nine sons. The chess game accidentally entered the fine chess pattern. In the second half of the game, KataGo had an accurate understanding of the rules, firmly grasped the 7-point advantage of the game and passed accurately, Xiao Ai also stopped, the system judged black 184 points, black wins 0.25 points. This is the first time in the history of the Artificial Intelligence World Tournament that both programs can perfectly execute the number rule of black stickers 6.5.

The defending champion star array held the white game this round, and was strongly blocked by the "AI Cup" "civilian" champion Transcendent Go. The robbery left in the upper right corner of the layout was like a time bomb that did not fire until the end. Affected by this constraint, White has not dared to exert any force in the mid-belly battle, and finally confessed to the big upset for the second time with 231 hands. Tsai Wei, who was defeated by the Stars in the last round, killed the Super Dragon in the second round, and Super Dragon stopped like an angry child until it was completely dead, which made people even call the AI ​​game result unpredictable.

On the first stage, the only two winning teams, Yile held black against LeelaZero, were even more dramatic. Belgium LeelaZero took advantage most of the time and entered the winning position of Blackboard 6, but suddenly disconnected in the final closing stage. Some insiders said that LeelaZero itself could not recognize the 6.5 rule this time, and the disconnection was to replace the body to perform the key pass victory. Unexpectedly, I don't know why the avatar failed to log in within the remaining 3 minutes, but unfortunately the victory was overtime. More good people say that Yile may not be able to pass, and it is better not to change it if you know it.

The most exciting game in this round was the veteran champion South Korean Pebble Whirlwind against Aiqi. The black Pebble Whirlwind played well and took the initiative. 219 moves took the initiative to plunge into a two-handed robbery that had many tribulations in favor of Black. Unexpectedly, Aiqi stubbornly endorsed the robbery while closing in, and the black side took advantage of the robbery. This robbery has been playing for 90 moves. The 309 black chess moves have a clear mind to eliminate the robbery, but they don’t want to sink into the giant dragon that surrounds the white death chess. The chess piece's life and death reversal is unreconciled, unwilling to lose over time.

In the fifth round, the only clear winner Yile Zhibai was suppressed by Tengu. In the end, the 8th son of Yile's bottom left was eaten, and the 35th son of the middle belly was still robbed by the big dragon. The big dark horse Caiwei, who had only lost to the star formation before, played finely in the fine chess situation, constantly widening the gap and easily defeating Aiqi.

In the first five rounds, Black wins 24 rounds and White wins 26 rounds. The teams stated that the 6.5 posting made it possible for Black to completely let go of the psychological burden of the big posting. As programmers have a deeper understanding of the rules of timely virtual hands, I believe that there will be no more humorous scenes of taking turns to push the opponent to the opponent in the final stage.

After five rounds, there is no winning team. The five teams of Tengu, Caiwei, Yile, Chaoran, and LeelaZero, all of which have 4 wins, are tied for the top spot. The fate of the three wins of the five teams of Star Formation, Stone Tornado, KataGo, Aiqi and Yinzhi is still in their own hands. Hands. Both Yi Xiaotian and Shou Tan, who had a complete victory yesterday, suffered a three-game losing streak today. If they want to qualify, they must have a complete victory tomorrow to qualify for a small score. The chances are a bit slim. The last runner-up and insisting on independent research and development for many years, holding the national key funding of South Korea's Xiao Ai only won 1 win and 4 losses, and was eliminated prematurely. It also confirms the technological progress of artificial intelligence Go in the past year, which is likely to far exceed most chess games. Friends' imagination.

The sixth round matchup is as follows: